Skip to content
NOW OFFERING: TELEHEALTH SERVICES Unprecedented times call for unprecedented measures. Virtual health services via video conferencing, texts and cutting-edge apps, telehealth is not only changing the way we’re able to care for you and your family, it’s also helping us combat the spread of COVID-19. Progressive health solutions delivered right from the comfort of your own home. Help us help you—call (916) 627-1494 or text (916) 884-6272 to schedule your telehealth appointment today.
Posted on April 19, 2018 by Elk Grove Hearing Care 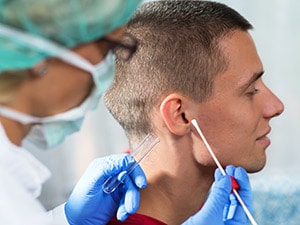 How Is Earwax Beneficial?

Sometimes mistakenly viewed as a sign of poor hygiene, earwax (also known as cerumen) is produced naturally by glands in the outer ear and plays a very important role in hearing health. It should not be viewed as something dirty that needs to be eliminated. In fact, complete absence of earwax will result in a very itchy, dry ear!

When present in normal amounts, earwax protects the lining of the ear canal and prevents dirt and dust from reaching the eardrum. Old earwax is constantly being transported away to the outer ear through the normal jaw motions of chewing and talking.

What Does Impacted Earwax Do?

However, trouble can occur when earwax becomes pushed down into the ear canal and impacted, usually by a foreign object such as an ear swab (Q-Tip) or a hearing device. A blocked ear canal can cause hearing loss, vertigo, ringing in the ears, earaches and infections. Earwax can also accumulate in hearing devices, resulting in problems with performance.

How To Remove Earwax at Home

When cleaning the ears, wash the external ear with a cloth, but do not insert anything into the ear canal. To remove excess earwax that is causing blockage, you can try placing a few drops of mineral or baby oil into the ear, or using commercial earwax removal drops. However, if earwax buildup is preventing normal hearing, don’t try to remove it yourself. Instead, contact a hearing professional, who will use the proper instruments or employ suction to remove the earwax.

Earwax buildup on a hearing device not only damages the instrument, but can block sound and/or cause the hearing device to not fit into the ear canal properly, leading to feedback. To remove earwax from your hearing aids, use a hearing aid cleaning kit that includes a wax pick and brush, and follow the directions carefully. Most often, you can wipe the hearing aids down with a lint-free cloth on a nightly or weekly basis to help prevent any wax buildup. You should also routinely visit your local hearing professional for “clean and check” appointments. These are usually scheduled in 4-6 month increments depending on the type of hearing aid you are using and how fast you accumulate earwax.